Be(a)ware of What You See in an fMRI Image 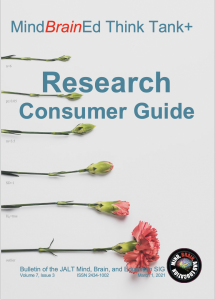 Why does fMRI come with a warning label?

Functional magnetic resonance imaging (fMRI) generated great excitement when it was introduced in the 1990s, because it allowed brain researchers to see what was happening, and where, inside a living person’s head. Before the twentieth century, researchers could only deduce the functions of brain regions after they had been damaged, and could only look directly at the brains of people who had died. However, fMRI images have also been labelled as “brain porn” (Helding, 2020, p. 48) when they are overused to add credibility to what writers and public speakers wish to say. I count myself among the gullible guilty who have scoured the internet for an image that will illustrate my point, with too little investigation into the original source. Let me share what I now know better!

How does fMRI work?

This technology measures changes in blood oxygen levels in areas of the brain where there is increased or decreased activity. Such changes cause the blood’s magnetic properties to change, too. If you put a person’s head in the strong magnetic field inside an fMRI scanner, you can measure these changes when they perform specific cognitive activities. The fMRI scanner also conducts a complex statistical analysis of this data in order to map cognition onto the brain structures that are active when it is in progress, and shares the results in the form of colour-coded patches superimposed on a structural scan of a horizontal or vertical cross-section of a brain. The image is seen to represent what is happening inside someone’s brain.

For the first time, brain imagers were able to track safely and accurately “when and where changes in the brain were coming from and turn them into accessible pictures that told compelling stories” (Rippon, 2019, p.77). There was a boom in the number of studies using fMRI to look at various aspects of brain function and a new discipline arose, cognitive neuroscience, which connected the activities of psychologists researching human behaviour with those of brain scientists researching the structures and functions of the human brain.

The brightly color-coded brain maps, which appeared to provide images of the real-time workings of this little-understood organ, brought neuroscience to the attention of the general public. However, the brain images used in so many news articles and popular science books were illusions. The published image is usually a construction of data, from an individual or a group, based on multiple decisions as to how to clean up the raw data and smooth anatomical differences to fit a template brain. Although the colourful images look like time-lapsed recordings of changes in the brain activity of someone performing a task in the scanner, in fact they are the result of a number of statistical manipulations, assumptions and compromises, such as the allocation of colours to the different types of changes.

Rippon reports that when radiologists were asked to help interpret the early images, they requested that the practice of colour-coding be replaced with gray-scale versions (2019, p. 82). The radiologists preferred to look at shades of just one colour because this helped them to identify slight anatomical changes. The difference between two regions could be very small as seen in the numerical data, but if the regions are shown in different colours, such as blue and yellow, this colour difference could trick the viewer into believing that the two close numbers were actually very different. While the colours are eye-catching, they are also misleading.

What are the drawbacks of fMRI?

Information on how to interpret fMRI images is usually not shared in publications and frequently not understood by many of us non-scientists. Moreover, studies have shown that the presence of brain images in news articles has influenced whether a line of scientific reasoning was judged to be credible or not by readers (Rippon, 2019). I can include myself among the unwittingly credulous until I was alerted to the limitations of fMRI scanning by reading about the work of the experimental psychologist Alan Baddeley (2019). He was enthusiastic about this technology at first and participated in five fMRI-based collaborations investigating memory. However, none of the research projects were successful. Some problems that arose were related to the equipment, but the main problems were that the results were unreliable, and replication of results was unsuccessful. 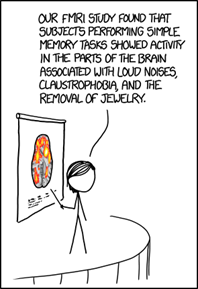 What does fMRI not tell us?

It is worth stressing what things fMRI can’t tell us. It does not give us a complete picture of brain activity, because it does not show us the passage of nerve impulses across the surface of the brain, or within key structures. Neither does it show the speed with which these processes happen. It shows only the blood flow changes that provided the energy for a brain activity that has occurred. Moreover, as Rippon (2019) explains, the color-coded images are “not a pure measure of one task or another” (p. 72). Let us take researching memory as an example. A subject may first be asked to look at single words projected one at a time onto a screen. Then the subject may be asked to look at a different set of words, but this time told to remember as many of them as they can. The data from the first task (reading) is then used to identify patterns of activity common to both tasks (reading and memorizing). This common data is subtracted from the memory task data, leaving the researcher with data unique to the memory task. The resulting brain image, however, shows the differences between a word-reading brain and a word-memorizing brain, not the real-time brain changes associated with memory centers being activated.

How has fMRI data been misinterpreted?

One of the issues with the interpretation of data in the early days of fMRI technology was “the reverse inference problem.” For example, when you locate activation in an area associated with a particular process, such as “reward,” and you find that area activated during a particular task, such as listening to a certain type of music, it is tempting to conclude that people like listening to music because it activates the “reward centers” of their brain. But this would only be true if parts of the brain were specialized in just one type of process, in this case “reward.” And you would also need to measure how positively the music was rated, to be sure that the activation was a strong index of pleasure/reward. In reality, it is very unusual for one area of the brain to be associated with a single function. You would need to be sure that other circuits, such as memory functions or attentional functions, were not being activated together with the “reward” circuit. After all, the music might be triggering a happy memory or alerting you to something pleasant, rather than making you feel good directly. The lack of understanding of this reverse inference problem led to spurious claims that brain imaging could be used to read someone’s mind and detect when someone is lying.

fMRI has limitations when exploring a phenomenon such as musical creativity in the human brain. In his entertaining TED talk, Charles Limb demonstrates the difficulties encountered when conducting fMRI scans with jazz musicians in order to understand their creative process. The lab environment and the position they had to adopt inside the scanner with a custom-built piano keyboard balanced on their raised knees were radically different from their usual performance setting and position. Moreover, they were instructed to move their right hand (and no other part of their body) during scanning and the only way they could see their right hand was through a mirror. This surely made it very hard to be creative! Limb himself acknowledges (both in his TED talk and in a coauthored paper, Limb & Braun, 2008) that the validity of a scientific study to observe the creative process undertaken in an abnormal and constraining environment like this can be called into question. This is called ecological validity. fMRI studies of musicians are limited to showing brain activity during an experiment and not during a performance or any other time they play for individual relaxation, jamming with friends, etc.

It occurred to me, as a language teacher, that fMRI scanning would also not be able to inform us greatly about classroom ecology, and my keen awareness of the role of the social brain in learning made me curious to find out what Matthew Lieberman has to say on the subject of fMRI scanning. In fact, fMRI technology enabled Lieberman and his co-researcher Naomi Eisenberger to have one of their great ah-ha moments when it showed them that two different mental processes (response to physical pain and to social pain) rely on the same neural mechanisms (Lieberman, 2013). 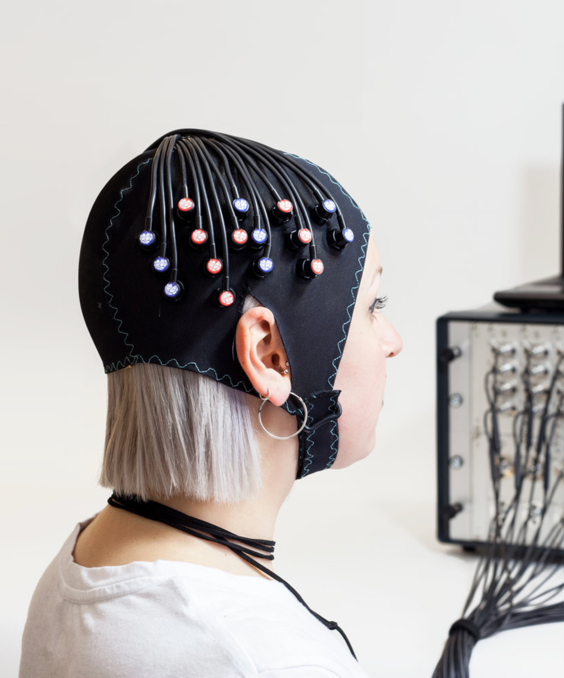 The good, the bad, and the future of brain imaging technology

Lieberman and Eisenberger’s discovery is just one example of how fMRI technology has brought huge advances to our understanding of the multiple roles of all areas of our brain. However, we need to read carefully the labels in scientific papers to make sure we understand what each fMRI image shows, and we must bear in mind that the images we see accompanying media reports may be decorative or, even worse, may not represent what is claimed by the authors. One of the big drawbacks of fMRI is that experimental subjects are physically constrained while being scanned. A new technology called functional near infrared spectroscopy (fNIRS) looks promising. Experimental subjects wear a head band with light emitters that direct light through the skull. When the light hits brain tissue, it can signal which brain regions are more or less active. This allows brain scans to be carried out when a subject is sitting up, or even strolling, talking, and interacting with other people. In this way, it can increase the ecological validity of an experiment. It is also far less expensive than using fMRI scanners and so could be used to study social situations in real-world contexts, such as classrooms, offices, and board meetings. But let’s treat all new technologies with greater awareness of their limitations, and make sure we understand what we are looking at when we examine the images that they produce! 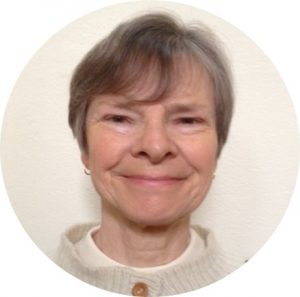 Amanda Gillis-Furutaka (PhD) is a professor at Kyoto Sangyo University and program chair of the JALT Mind, Brain, and Education SIG. She is an enthusiastic writer for the MindBrainEd Think Tanks because they push her to look more deeply into a wide range of subjects that she needs to know about in order to teach more effectively.