The Think Tank We Always Wanted to Do 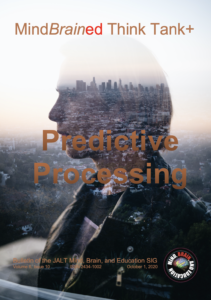 This is the issue we have been wanting to do for years. Predictive processing (also called “predictive coding”) is one of the most interesting perspectives on what the brain does, and it veers heavily away from traditional views. You only get an inkling of that if you watch the Lite intro video choice, but if that short Part 1 catches your fancy, continue on with the next two or three in Jones’ set. Then, if your level of interest keeps rising and you feel brain-strong, go on to the master himself, Andy Clark, in the Deep intro video choice. As you will discover, Andy and his colleague, Karl Friston, are not the easiest people to understand, and that may be why the theory is not more widely known. I don’t think I would have looked into it had I not had my curiosity piqued years before by a short statement from a psychologist: “Our brains are always predicting.”

So, predictive processing. In doing this issue, we had no trouble deciding who to ask. As far as we know, the contributors to this issue are the only people who have ever presented on predictive processing at language teaching conferences in Japan, and maybe they are the majority of presenters on the theory at language teaching conferences anywhere.

This Think Tank was not easy to write. The theory gets quite complex as Jason’s and Caroline’s meaty-but-wonderful articles show. The rest of us worked on simple ways to explain the theory, with the goal of making it accessible but at the price of oversimplifying it. The original plan was for me to write a starting piece that explains the theory and then have the other articles on applications of the theory stream off that one. To our surprise, it turned out that Stephen’s wonderful article was even simpler than mine, so we put his first. Cooper also gave us a simple and engaging way to understand the theory, before Jason’s and Caroline’s deeper ones, so we had a nice up-ramp from start to finish. Then, we noticed that we had only partially succeeded in including specific examples of language teaching, so Harumi came to our rescue by digging down into teaching multi-word expressions.

A couple points that we did not quite discuss enough are as follows:

1) That peculiar thing called grammar is a predictive processing, prediction-generating model in itself. Once you understand that, it is not so peculiar anymore. The first words of a sentence, She ate…, highly constrain what can come after, and your brain is already predicting possibilities. Adding that constrains the possibilities even further, and then add delicious and we are limited to favorite foods. Adding piece of eliminates ice cream and soup as choices, and, depending on context and probability, we predict the next words will be meat, cake, or the like. In this process, we have reduced the words that might follow from the 25,000 or so the average person knows to just 3 or 4. If we hear wedding come next, the end of the sentence is pretty much decided for us.

"The emotions you feel are predictions, not reactions."

2) As Lisa Feldman Barrett informs us (see Emotion Think Tank), most of the emotions you feel are predictions, not reactions. When you walk down a dark, deserted street in an unknown neighborhood, your heart doesn’t start beating because of the pavement or parked cars, you feel fear because of what your brain is already predicting could happen. And if you think about it, anger, jealousy, pride, etc. all follow that pattern as well. Predictive processing explains why people behave in certain ways.

3) We only briefly touched on the Bayesian Brain, an important component of predictive processing, in which probabilities are constantly modified by incoming information. We have added a video on that topic, which is also viewable here.

So, turn off the TV, unplug your phone, sit back, and get comfy. We predict you are about to embark on an amazing journey.

Curtis Kelly (EDD), the first coordinator of the JALT Mind, Brain, and Education SIG, is a Professor of English at Kansai University in Japan. He is the producer of the Think Tanks, has written over 30 books and 100 articles, and given over 400 presentations. His life mission, and what drew him to brain studies, is “to relieve the suffering of the classroom.”

Return To The Main Issue
PrevPreviousCall for Contributions: Ideas & Articles
NextEggs to Dopamine: The Shock of the NewNext