Social: Why Our Brains are Wired to Connect

By: Glenn A. Magee 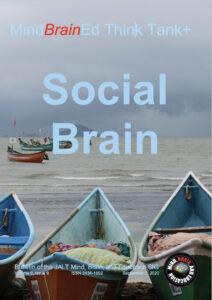 Social: Why our Brains are Wired to Connect is a book about how our brain and nervous system shape cognition and behavior. The book consists of twelve chapters with three main sections that cover three critical evolutionary brain adaptations that motivate us toward social connection and to form unified social groups and organizations. These adaptations are: the overlap between social and physical pain systems in the brain (connection); how we are constantly paying attention to what other people think (mindreading); and how we adapt to and are influenced by our environments and are motivated to help other people more than ourselves (harmonizing). The last three chapters of the book provide an additional section that takes the scientific discussion and roots it in practical applications for work and education.

One of the aims of this book is to introduce the idea that our brain’s primary purpose is social thinking. Overall, Lieberman presents a compelling argument for the topic. In the section on connection we are introduced to the idea that our brains are geared to social thinking, using evidence from research using brain imaging (fMRI). Lieberman found an area of the brain (the default network) that activates (has increased blood flow) when we are not actively focused on our surroundings. He found that this area activates when people are thinking about other people, themselves, or events in the past or future. The trade off when the social brain is activated is a negative correlation with activity in other parts of the brain, specifically attention systems. The opposite holds true as well. For example, students in a classroom who are really paying attention and focused on what they are doing may do so to the detriment of their social awareness. In other words, if you are not working with the people around you but are focused on what you are doing then you run the risk of alienating yourself from the group. That seems like a clear and solid explanation of why collaboration, which uses both social and analytical systems in the brain for learning, is vital.

The section on mentalizing discusses how we infer the intentions of other people through an ability that researchers have termed Theory of Mind. Lieberman discusses two systems central to Theory of Mind. The first is the mirror system, a network of neurons that activate in relation to the observable (concrete) actions of others and the mentalizing system which activates as we try to predict unseen (abstract) thoughts. Lieberman argues that our ability to understand what other people might think and, similarly, what they might feel are both critical to effective social connection and that mentalizing is the application of these abilities. Basically, Theory of Mind is a social skill that children learn as they grow up and is essential in enabling us to create harmony with others. The better we become at predicting the mental states and intentions of others, the better we will be able to respond appropriately in social interactions. In short, we learn how to move from “me” as the center of the world, to “me” in relation to everyone else in the world.

"Our brains will be seeking to harmonize with the people around us."

If, as Lieberman argues, we spend a lot of time thinking about social relationships (default network) and trying to predict what other people are thinking in order to have seamless social interactions, then it is understandable that our brains also will be seeking to harmonize with the people around us. This is the third point in Lieberman’s book. We are motivated more to help others than ourselves, because of the influence of social norms. That is, we want to fit in. Lieberman argues that we often do not appreciate the extent to which society has affected our thinking and shaped our behavior. To demonstrate this point, he introduces research on how even just the suggestion of being judged by other’s makes us subconsciously exercise self-control to harmonize with social norms. In one of the research studies, a mirror was put in a room with students taking a test. Students were instructed not to continue writing after a loud bell had sounded as this would be considered cheating. The researchers then observed how less likely students were to cheat. I was surprised to find that the difference was huge–when a mirror was not present in the room 71% of students cheated, but when a mirror was present that dropped to only 7%.

The idea that society places more emphasis on self-control than on the quality of our lives was a further point that grabbed my attention. Lieberman uses the example of John Lennon who was asked what he wanted to be in the future and replied, “‘happy.”’ His teachers could not accept this answer because it focused on something they did not see as beneficial to society. In short, his answer did not make sense to them. It made me think that this is something to look out for. What my students want may be quite different from my expectations.

The last section of the book deals with how we can bring our new awareness of how socially-oriented our brains are into the workplace and education. Many of the suggestions will seem intuitive to teachers because the social dynamics of the classroom generally demand our care and attention. This is a good thing. It would be worrying, in a book on social cognition, to find research promoting the exact opposite of what many teachers do daily.

In conclusion, this book brings together both insights from brain imaging studies and findings from psychology to construct an effective argument for why our brains seek social connection. Social is written with a broad readership in mind. There are technical explanations of neuro-anatomy and how the research findings presented in the book relate to neuro-anatomical areas but a detailed understanding of the brain and our nervous system is not required to follow Lieberman’s well-constructed argument as he makes effective use of a question and answer format. There is one point we should keep in mind, though, as we read. Many of the research findings are based on examining blood flow changes in the brain, using brain imaging (fMRI) scans. These results should be considered together with studies from other disciplines and in no way should they be taken as showing causality, because fMRI scans have to be interpreted and there is always the possibility for human error. Moreover, imaging results are also influenced by other factors, such as age, drug use, and how much carbon dioxide you have in your blood. That said, Social is a comprehensive introduction to the topic of social thinking that links fMRI studies with psychological studies and introduces practical suggestions of how being more aware of the social brain can positively impact on the way we teach.

Glenn Magee is a lecturer at Gifu Shotoku Gakuen University. He is researching student well-being and metacognition.

Return To The Main Issue
PrevPreviousTapping into the Social Brain to Tackle Classroom Incivility: Emotional and Social Intelligence
NextThe Anxious Elephant in the RoomNext